Do you know what day it is? It’s #nodebotsday! 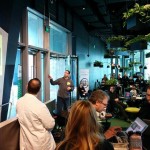 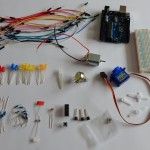 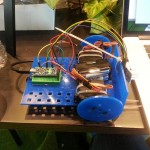 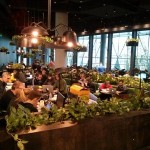 Working away on nodebots @NAB 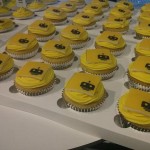 Attack of the Cupcakes 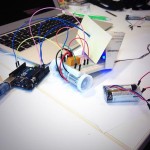 I had so much fun mentoring at NodeBots day in Melbourne! I got to meet a great bunch of people from such diverse backgrounds, and all with a love for learning and experimenting.

The day started off with registrations. We got to the venue just before 10am, and people were already lining up, so the registration process had to happen pretty quickly, @ajfisher got most of the registration sorted and then handed it over to me. This was the first event where I’ve ever actually ‘signed’ people in. But thanks to the Eventbrite app on Andrew’s phone, this just involved scanning QR codes on the attendees EventBrite confirmation tickets.

The Australian government should really get onto a registration system like this for election polling. This process could also be used to check for duplicate tickets and speed up the registration process on polling days.

The second part of the registration process was to hand out the right NodeBots packs based on the type of ticket people had purchased. Unfortunately, in my excitement I accidentally gave a couple of people the wrong packs, but thankfully we managed to sort this situation out, and order was restored so no one missed out. That was my first fail of the day, before the event had even started!

The Melbourne event was held at NAB’s new co-working space, the village which is located inside the NAB building at the Docklands (the same building where the Stripe fireside chat was held last Tuesday). This just happened to take place on the same day as the Open House Melbourne weekend, where over 100 buildings and businesses around Melbourne CBD open their doors to the public for a show and tell inside their space. Luckily, the NAB building is huge, and this didn’t impact on us too much, other than for one of our attendees who was asked to move her daughter’s pram from it’s spot parked out of the way, under a table, because ‘media’ were due to arrive soon. I thought the media loved supporting women and babies!

Other than that, some of the NAB staff got a few questions from interested members of the public about what we were all doing at the village and I heard a few mentions of ‘they’re making robots over there’.

Once the registrations were done, Hadi and Andrew took everyone through a quick electronics primer, followed by a quick JavaScript primer.

And then we were off!

People got into little groups and started working away on assembling their ardx, or SimpleBot kits – and we (the mentors), started to walk around and meet people, and help them out. The best type of gig!

Before I knew it, it was lunch time.

I have to mention that I really enjoyed the lunch. I had a bread roll with a tofu mixture inside, and a couple of tofu rice paper rolls, all of which were delicious. I will have to remember to ask our food sponsors @PaperCutDev about who catered the food, because it was lovely, and it served as great fuel for the afternoon session.

After lunch, there was more talking, and helping to be done. I noticed a couple of people were having issues with their npm installations of johnny-five, particularly with a compile error that was showing for a johnny-five dependency called ‘serialport’. We had this error on at least 2 Windows machines, and one Mac machine.

Lessons learnt (tips) for windows users who were having some NPM install errors:

It was fantastic to get the opportunity to experience the thrill of seeing people get their first ‘hello-world’ led to blink, right through to getting their SimpleBot assembled and running on it’s USB leash. We had a few kids at the event, as well as few women, some of whom I’ve previously met at Girl Geek events. We also had a few more technically advanced people join us at the event and work on their own projects, to demonstrate the types of projects that can be achieved.

Overall, a really fun and rewarding day. It was also great to follow NodeBots day as it was taking place around the world on Twitter (#nodebotsday), in Australia we got to see 2 more days of the event as other countries got to their 26th of July.

Look forward to seeing even more women at the event next year!

Do you know what day it is? It’s #nodebotsday!

Take back control of your -g NodeJS packages on Windows